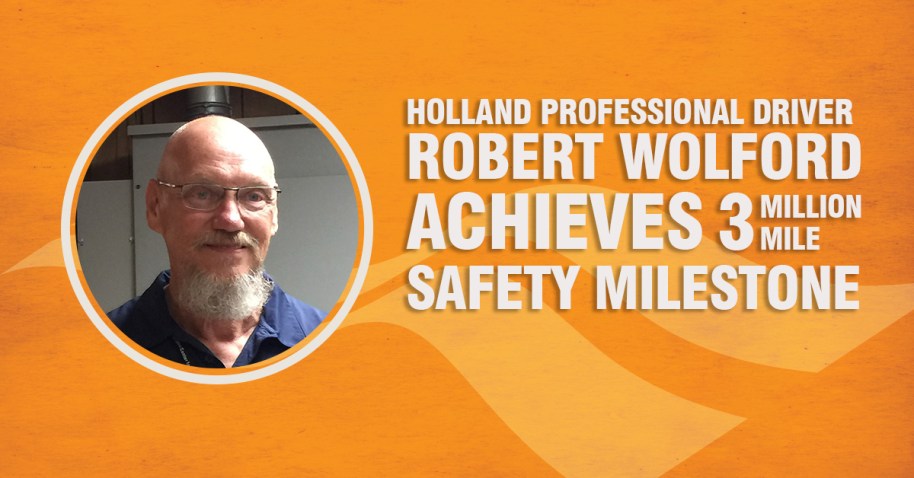 HOLLAND, Michigan, October 17, 2019 — (GLOBE NEWSWIRE) — (NASDAQ: YRCW) — Professional driver Robert “RB” Wolford has logged his three-millionth consecutive mile without a single accident while driving for Holland.
The three-million-mile safety record is a remarkably rare industry accomplishment placing Wolford among an elite group of professional drivers. To lend some perspective to this milestone, driving three-million-miles is equivalent to making six round trips to the moon, or circumnavigating the globe at the equator over 116 times–all without a single accident. Wolford is one of 34-active Holland drivers having reached this milestone.

“We are tremendously proud of Robert (‘RB’) and his safety achievement,” said Tamara Jalving, YRC Worldwide Vice President of Safety. “His record represents decades of unwavering professionalism behind the wheel and a concentrated safety focus. His dedication to safety helps to make our highways safer and helps Holland deliver award-winning quality service to our customers. We congratulate ‘RB’ and thank him for his continued commitment to safety.”

Wolford grew up with trucking in his blood. He’s a third-generation truck driver, inspired by his grandfather, father and uncle. A member of the Holland Safety Committee and a driver mentor, he believes in sharing safety knowledge. He states, “I’ve been very fortunate to have good, safety-minded mentors in my career. I’m proud to be a driver mentor for Holland. I’m a firm believer in giving back. No one knows how to do it right from the get-go. It’s important to do your part, be safety-minded and lead by example.”

He has participated at the Michigan state truck driving championships eleven times (always placing in the top three). He was chosen “Rookie of the Year” at his first Michigan truck driving championship in 2008. Wolford twice qualified for the National Truck Driving Championships (NTDC), the “Superbowl of Safety,” and competed for the first time in 2008 against the best of the best professional drivers in the United States in the Straight Truck class and again, in 2017, in the Flatbed class. Just to qualify for NTDC, drivers must earn first place in their class at their state competition and remain accident-free, regardless of fault, for one year prior.

The Michigan Trucking Association honored Wolford as its September 2019 Driver of the Month.

Holland celebrated Robert “RB” Wolford’s three-million-mile safety achievement at the Detroit, Michigan service center with an award ceremony where Wolford was presented with a commemorative 3-million-miler jacket, a plaque, tractor decals and a personalized 3-million-miler ring. Coworkers, his wife, aunt and 82-year old uncle “driver mentor” and additional family members traveled significant distances to attend the celebration. Wolford received a surprise two car police escort with flashing lights and sirens as he neared the Detroit terminal in recognition of his safety milestone.

About Holland
Holland has long been recognized for delivering reliable next-day service lanes in its territory and annually records some of the lowest claim ratios in the industry. Founded in Holland, Michigan, in 1929, Holland provides industry-leading, on-time reliability for less-than-truckload shipments in the Central and Southeastern United States and Eastern Canada. Holland has been recognized by Logistics Management magazine with its Quest for Quality awards for 32-years in the South/South Central Regional LTL Carriers, Midwest/North Central Regional LTL Carriers and Expedited Motor Carriers categories. Holland is a subsidiary of YRC Worldwide (NASDAQ:YRCW). YRC Worldwide Inc., headquartered in Overland Park, Kansas, is the holding company for a portfolio of less-than-truckload (LTL) companies including Holland, New Penn, Reddaway, YRC Freight, and YRC Reimer as well as the logistics company HNRY Logistics.

Please visit our website at hollandregional.com for more information.