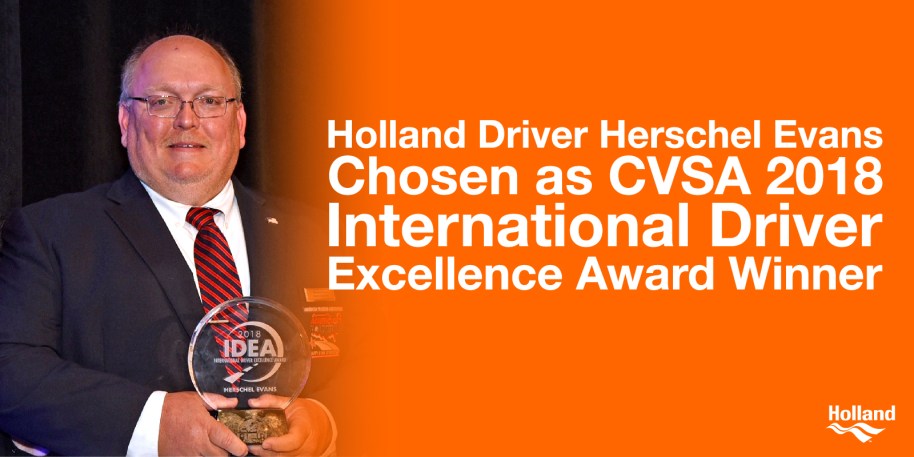 “Greatness can only be reached by those who strive for excellence and continuous improvement. I’m proud to say Holland driver Herschel Evans embodies that greatness,” stated Scott Ware, president of Holland.

“Herschel is an exceptional role model of what a professional driver should be. He was the first Holland driver to be chosen as an ATA America’s Road Team Captain. Herschel has an avid desire for safety and sharing the road safely. He has frequently donated his time and service to relief efforts (such as the Convoy of Care), delivering critical supplies to families affected by major natural disasters. Herschel is a ‘do-it-all’ champion of safety–training trainers and dedicating most of his business and personal time in tireless efforts to make our roads safer and save lives,” noted Ware.

Evans has driven more than three million miles over 31 years; 24 of those years with Holland as a city driver in Atlanta, Georgia. He is a two-time 5-Axle national driving champion (2011, 2008), a professional Holland driver/trainer/mentor and an ATA America’s Road Team Captain who spends time each month speaking with community groups, to news media, legislators, industry and government officials about highway safety and the essentialness of the trucking industry. He was named 2012 Georgia Driver of the Year; placed first in the Georgia Truck Driving Championships (TDC) Sleeper category in 2017; first in the 5-Axle category in the 2012, 2011, 2008 and 2006 Georgia TDCs. He was Georgia’s “Rookie of the Year” in 2006. He has been the driving force behind the Safety Drive for a Cure for over the past six years.

The American Trucking Associations presented Evans with the Mike Russell Trucking Image Award in October 2017 for creatively generating positive awareness of the trucking industry by “representing the industry through his role as an America’s Road Team Captain, his lifetime commitment to safe driving, and his establishment of the Safety Drive for a Cure truck driving competition in support of the Pediatric Brain Tumor Foundation which has grown to attract attention and tens of thousands of dollars in donations.”

“Hundreds of drivers have travelled from across the U.S.A. for the past six years to compete in the Safety Drive for a Cure–improving their safety skills–focusing on safety, advocacy, service and contributing to the Pediatric Brain Tumor Foundation. Safety leaders such as Herschel help to make our nation’s highways safer for all of us,” said Ware.

Evans truly loves what he does: “I love what I do for a living. It is never the same day twice. There is nothing boring about driving for a living. You get to see the inner workings of many different places. These are some of the businesses and organizations that make your community run. And these places are kept running by drivers like me–delivering what is needed. Every day I have a sense of doing something that is necessary.”

“After my company nominated me, I read the impressive bios of the previous winners, and I did not think I belonged in that group,” said Evans. “I feel extremely honored to be selected.”

Safety tips from Herschel Evans: “One day at a time. One mile at a time. You can never be in such a hurry that you take chances. It simply just isn’t worth it. Taking chances provides such a small benefit for such an enormous risk. Space and time are your two best friends on the road. You need space to maneuver and time to decide and react. You can help to prevent accidents by giving yourself more space and time.”