IF YOU REQUIRE ANY SHIPMENT INFORMATION PRIOR TO JANUARY 22, 2022, PLEASE CLICK HERE Learn More » 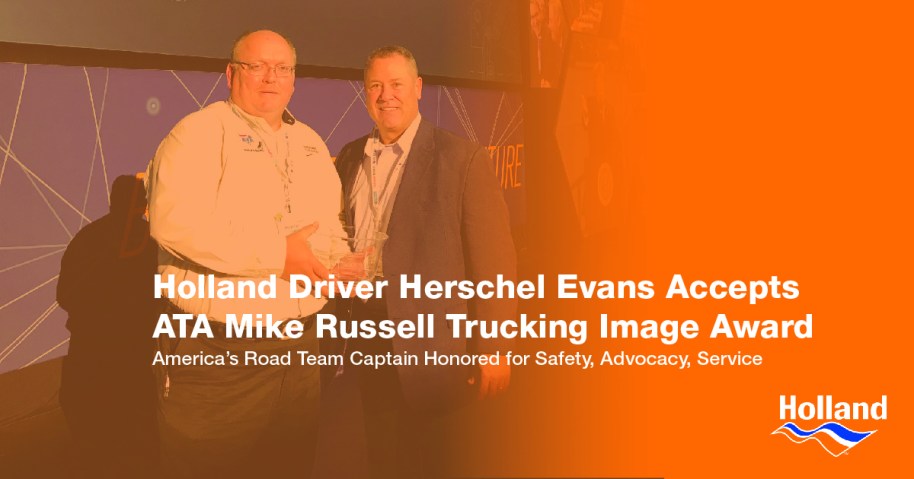 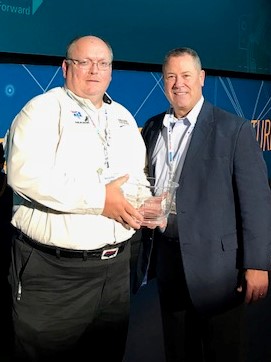 Evans of Atlanta, Ga. as one of the ninth annual Mike Russell Trucking Image Award recipients on October 23, 2017 at the trade organization’s annual Management Conference and Exhibition in Orlando, Fla. Evans, a professional truck driver for Holland and an ATA Road Team Captain, is the driving force behind the Safety Drive for a Cure, a truck safety and skills competition benefitting the Pediatric Brian Tumor Foundation.

Herschel Evans was chosen for “representing the industry through his role as an America’s Road Team Captain, lifetime commitment to safe driving, and his establishment of the Safety Drive for a Cure truck driving competition in support of the Pediatric Brain Tumor Foundation which has grown to attract national attention and tens of thousands of dollars in donations.”

“Greatness can only be reached by those who strive for continuous improvement,” stated Scott Ware, president of Holland. “For the past five years hundreds of drivers have travelled from across the U.S.A. to compete in the Safety Drive for a Cure–improving their safety skills–focusing on safety, advocacy and service. Safety leaders such as Herschel help to make our nation’s highways safer for all of us.”

The Mike Russell Trucking Image Award celebrates companies, organizations, and individuals who creatively generate positive awareness of the trucking industry. The award was named in honor of the late Mike Russell, who supported the trucking industry and was a former ATA vice president of public affairs. Three additional 2017 winners include: Shannon Newton, president of the Arkansas Trucking Association, industry nonprofit Truckers Against Trafficking and carrier Load One.

Evans is a two-time 5-Axle national driving champion (2011, 2008), a professional Holland driver/trainer/mentor and an ATA America’s Road Team Captain who spends time each month speaking at schools, community groups, news media, legislators and industry and government officials about highway safety and the essentiality of the trucking industry. He has driven for Holland 23 of his 30 years as a city driver in Atlanta, Georgia. Named 2012 Georgia Driver of the Year, Evans placed first in the Sleeper category in 2017, and first in the 5-axle category in the 2012, 2011, 2008 and 2006 Georgia TDCs. He was “Rookie of the Year” in 2006. He has been the driving force behind the Safety Drive for a Cure for over the past five years.

Herschel Evans said, “To be recognized on a National level for the efforts we make in putting on the Safety Drive for a Cure is truly overwhelming. This award does not belong to me alone. There is a large and tremendously hard-working group of volunteers who come together to make it happen each year. I humbly accept this award in honor of all those who give their time and support to bring this event to reality each year. It couldn’t have happened without the yearly support of Holland, YRC Freight and YRCW.”

Evans resides in Bremen, Ga. with his wife, Holli.

2018 Safety Drive for a Cure: Benefitting the Pediatric Brain Tumor Foundation
DATE: March 17, 2018
Website: http://curepbt.org
Holland and YRC Freight are co-sponsors for the annual Safety Drive for a Cure, a truck safety and skills competition held at the Holland Atlanta, Ga. service center located at 4700 Highway 42 (Moreland Ave.), Ellenwood, Ga. 30294. Team trophies and awards are given to respective class champions (Straight Truck, Three-Axle, Four-Axle, Five-Axle, Flatbed, Tanker, Sleeper, Twin Trailers, Management, Retired, Rookie of the Year), as well as the farthest traveled and the driver who raises the most PBTF donations. The event is open to all professional drivers with a CDL. “This event showcases how serious the trucking industry is about safety,” said Holland President Scott Ware. “It helps get more drivers involved in state truck driving competitions, gives veteran drivers a way to fine tune their safety skills, and aids the Pediatric Brain Tumor Foundation. We are honored to co-host the annual Safety Drive for a Cure.”